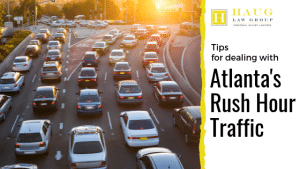 If you’ve lived in Atlanta for any extended amount of time, then you know how bad the traffic is here. While Atlanta isn’t on the top of the list for the worst traffic of all US cities, it does make the top 15. According to data gathered between 2013 and 2016 from the U.S. Census Bureau in 2017, Atlanta ranks number 13 on the list of the worst U.S. cities for commuters. Out of all the people in Atlanta that commute to the office, 86.4% of them drive. That makes for one heavy rush “hour.” We all know Atlanta’s rush hour is more accurately considered 3 or 4 hours long.

Additionally, due to Atlanta’s spread-out geography and more residents moving to the northeastern suburbs, the city has a high average commute time of 32.2 minutes. Atlanta is also severely lacking in public transportation, further adding to the problems that affect the city’s commuters.

If you’re part of the 86% of commuters that drive to the office, then you likely see a lot of accidents within the course of a week. With the high volume of drivers on the road during Atlanta’s rush hour, the chance for accidents is heightened. We’ve got some helpful tips to make your commute safer.

This may seem obvious, but we all need to be reminded that our speed has a big effect on the safety of our driving. Proceeding with caution and practicing patience while behind the wheel will always help in avoiding an accident. Instead of trying to beat the drivers around you, match the speed of the flow of traffic to avoid causing a crash. It also helps to maintain your lane unless it is necessary to get over. Weaving in and out of traffic raises the risk of an accident occurring, especially when done quickly. Instead, stick to your lane and only move when it is necessary.

When lane changes are necessary, use your blinker to let other drivers know that you are about to make a move. Turning your blinker on before changing lanes, instead of while changing lanes, is more effective in warning those around you. Often times, accidents are caused because drivers fail to use their turn signal, resulting in two cars going for the same spot at the same time and running into each other. A blinker serves as a simple solution in these kinds of scenarios.

The texting law that went into effect this year for all Georgia drivers proves that all drivers need to focus on removing distractions when driving. Distractions such as talking on the phone, eating, or reaching to stop fighting children in the backseat all affect our driving safety. When driving in rush hour traffic, limit your time on the phone to as little as possible, never text, and don’t try to eat. If you have a passenger in the car with you, have them take care of any possible distractions (like children) instead of yourself. The more attention you can put on the road, the safer everyone in the car will be.

Here at The Haug Law Group we treat your safety as our top priority. If you have been injured in a car accident due to the negligence of another, contact us today!